Should You be Concerned About a Chlorine Smell In Your Drinking Water?

The smell of chlorine can immediately have you thinking of swimming pools. The main reason for this is that chlorine has been used as a disinfectant for many years. What you may not be aware of is that chlorine has also been used to disinfect drinking water for over a hundred years. While this odor is often associated with cleaning products, it can be very disconcerting when the water comes out of the tap smelling strongly of chlorine. 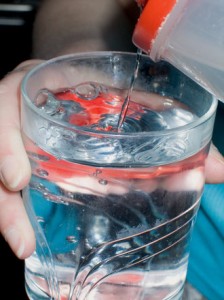 Why is Chlorine Used?

Chlorine revolutionized water purification and is considered to be the greatest achievement in public health of the twentieth century. Chlorine was used to protect the general public from bacterial and viral contaminants in water supplies, which were responsible for serious outbreaks of illnesses such as cholera.

Today, chlorine is still widely used as a water disinfectant. It is used at municipal water treatment facilities to neutralize waterborne diseases such as hepatitis, cholera and typhoid. Unfortunately, the recent media attention about water disinfectant byproducts or DBPs has had many consumers questioning the use of chlorine, but should we worry?

The Potential Danger of DBPs:

DBPs are formed when the disinfectant being used to treat drinking water supplies have a reaction with certain naturally occurring materials within the water. The primary byproducts resulting from using chlorine to disinfect drinking water is trihalomethanes and haloacetic acids.

Primarily, exposure to DBPs occurs through ingestion of contaminated water, but they can also be absorbed by the skin. There have been a number of studies conducted into the potential health risks associated with DBPs. These studies have shown a possible link between exposure and an increased risk of developing cancer and reproductive health issues including a higher risk of miscarriage and lower birth weight of infants. Unfortunately, there have been no conclusive research studies that have established a strong causal link.

Federal and local agencies have been aware of the potential danger of DBPs for some years. The EPA has been regulating municipal facilities for DBPs since 1979. This regulation was established to address the potential health risks of chlorinated water. In some areas, the EPA has mandated that some water utilities switch to alternative disinfectant products such as chloramine to reduce a number of DBPs.

If your drinking water has a chlorine smell, there is a good chance that it may contain DBPs. There are a number of reliable resources such as EPA consumer reports, which detail what chemicals are used in your local municipal drinking water supply and how it is treated before it enters your home.

Additionally, there are a number of domestic water filter products that can be used to remove DBPs from drinking water. These water filters provide an additional level of security and can also be used to remove other potentially harmful contaminants such as nitrates creating clean, healthy water. A whole house system can totally eliminate DBP exposure, so you can shower and bathe with the confidence that you are not absorbing any harmful contaminants through your skin.

Greg Scott is President of Valparaiso based Miracle/EcoWater Systems, the premier water conditioning company in Northwest Indiana serving the Lake, Porter and LaPorte County areas.  A 3rd generation water treatment professional, Greg grew up in the family owned business  started by his grandfather in the late fifties.  He has made water treatment his life and under his direction and high-standards, the company’s water treatment experience, knowledge, and products are unrivaled in region.